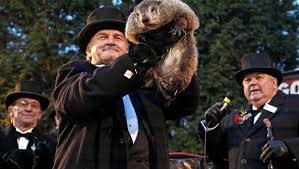 For those of us located here in the United States and Canada we have a popular tradition on the 2nd of February, that being Groundhog Day. However, there are several questions that I have regarding this day and its significance. For starters, what exactly is this tradition? Even better, where did it come from? I am sure that I’m not the only one who has ever wondered about this. So being Groundhog Day I thought I would look into it.

To understand the day a little better there is an important fact that we need to know, what exactly is a groundhog? So a ground hog is a form of rodent belonging to a large group of ground squirrels or marmots. These animals spend their winter months hibernating below the soil. Ultimately when you break it down a groundhog is a woodchuck. So the next question is how much wood can a woodchuck chuck……? Kudos if you know the rest of that tongue twister. Now we know what a groundhog is, let’s learn the lore behind him.

While researching this I found a number of interesting facts. For starters this tradition goes back to Germany in a lose sense of the matter. In Germany the tradition is called Candlemas. When this tradition started in Germany they actually would use bears for this and then latter fox’s. As bears became scarce they started to use a badger. Some areas of Germany still use a badger and celebrate this day.

Eventually this tradition made its way to the states. It all started with the Pennsylvania Dutch who hailed from German speaking areas in Europe. In a diary left by James Morris it shows that he celebrated this day in 1840. However, it was not until 1886 when the tradition really took a foot hold in the US. This was when the first published mention of the celebration was made in the Punxsutawney Spirit. Then in 1887 there was an official commemoration of the day.

Lore behind this states that if the groundhog sees his shadow the groundhog will retreat back into his burrow and there will be six more weeks of winter. However, if he does not see his shadow the spring season will arrive early. Personally I look at this way, either way you look at it there are at least six more weeks of winter. I say at least since I live in the mountains it always seems to last a lot longer than six weeks. It all connects back to the farms in the Pennsylvania Dutch Country side where farming was and is the way they make a living.

Throughout the US and Canada there are a number of places that celebrate this tradition. However, the most notable and famous place is Punxsutawney, Pennsylvania. Each year thousands of people gather to see what Punxsutawney Phil will predict. Punxsutawney Phil is considered to be a Supercentenarian and has been predicting the weather since the inception of this celebration. A number of other areas that celebrate this event often use a taxidermy groundhog. There is also a spoof of this day in Washington DC that revolves around politics.

After learning all of this I only have one question left. How does he not see his shadow every year with all the lights and cameras present on Groundhog Day? Well it is well past his usual reveal of the weather. For those who have not yet heard. Punxsutawney, Phil saw is shadow so that means SIX MORE WEEKS OF WINTER.

I hope you all enjoyed this little insight and history of Groundhog Day. If you enjoyed or found this interesting please give it a like to let me know. Also if you have any thoughts, comments, or suggestions for future entries please feel free to leave it in the comments below. As always check back next Friday at 1500 or 3 PM for a new original story.