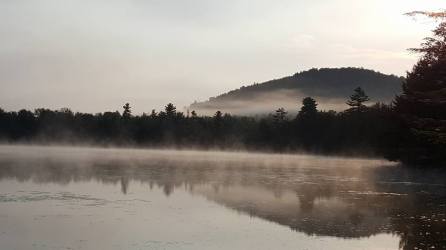 It is Fred’s first day off from work in over a week. Instead of sleeping in like he deserves to, since he only got a couple hours of sleep. To him sleep is overrated and you get more than enough when you’re dead.

Before the sun even comes up, it is easy to tell it is going to be another scorcher. Walking out the back door of his house he takes a deep breath of the fresh invigorating morning air.

With very little effort or energy he throws his canoe and fishing tackle into the bed of his beat-up old truck.

Bombing down his dirt road making enough noise to wake the dead in the nearby century’s old graveyard. Flashes of movement across the road and fields as deer bound towards the tree line of the woods.

Arriving at the lake shore Fred looked out over the Stillwater. From his vantage point the water had a smooth mirrored appearance. The tranquility of the lake was enhanced by the soft sound of crickets in the weeds.

In the pre-dawn hours he wasn’t sure if his eyes were playing tricks on him. He was unsure if there was a fog over the water or just the haze of sleep in his eyes.

Rowing from the shore all he could hear was the sound his oars made as they broke the water’s surface. The Thud and splash of the anchor going overboard echoed off the hilly shore line. Sitting in the darkness and using a head lamp for illumination, Fred baited his hooks. Casting his two lines and allowing them to drop into the dark reaches of the watery world below.

Stretching out in the canoe Fred, kept a watchful eye over his bobbers as they floated nearby. Trying his hardest to stay awake, his head bobbed up and down more than the bobbers on the water. Sitting there the sounds of the crickets and whippoorwills being carried across the water, ever so slowly being replaced by the sounds of the morning birds as they come out from there nightly slumber. Who couldn’t help but dozing off with such idyllic surroundings. Every once in a while Fred would real in his lines to check the bait and reposition his lines.

With the morning light increasing, Fred could see a light mist hanging just over the water’s surface. The light mist made the sights and sounds of the lake in the early morning just that much more relaxing. As the air heated up the mist started to dissipate as it slowly rolled along the surface of the water as if it were smoke.

As the rest of the world started to come to life the serenity of the morning rapidly deteriorated. With the growing sounds and the nearby construction, Fred started to get disturbed and decided it was time to head to shore. Granted during his time on the lake he never so much as got a bit, it was a good relaxing morning.

After all it is fishing not catching. Not to mention there is always tomorrow.

I hope you all enjoyed. I would love to hear what your opinions and thoughts are. Please feel free to like and comment, also don’t forget to hit the follow button to see when each post goes up.

So until next week, sit back and relax with a good book.